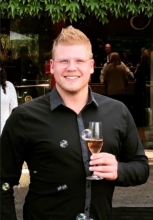 J Vineyards & Winery Assistant Winemaker Kenneth Jacob “KJ” Block has traveled across five continents learning about wine, each new region and experience broadening the depth of his expertise and understanding.

Raised in San Luis Obispo County along California’s Central Coast surrounded by grapevines, KJ’s interest in the world of wine was piqued early on. Adventurous and intellectually curious, he enjoyed ranching and agriculture, excelling in 4-H and FFA as well as academics. By the time he graduated from California Polytechnic State University, San Luis Obispo with a degree in Wine and Viticulture, he knew that the world of wine offered a chance for endless discovery, a lifetime of learning and exploring.

Seasonal winemaking internships throughout college led to an enologist role at Merryvale Vineyards’ Starmont winery shortly after graduation. A year later, he moved to Europe to earn a Master of Science in Viticulture and Enology, focusing on sparkling wine research. Over the next two years, he studied at in France at Montpellier SupAgro in Montpellier and Bordeaux Sciences Agro in Bordeaux — working with a Biodynamic Champagne house as well as an estate in AOC Pessac-Léognan — then at Hochschule Geisenheim University in Geisenheim, Germany, where he worked with wineries on Sekt and Pinot Noir production.

Returning home to the Central Coast in 2017, KJ joined E. & J. Gallo Winery’s Courtside Cellars, working with Burgundian and Alsatian varieties. In 2018, he joined J Vineyards & Winery as Enologist, rising to Assistant Winemaker in early 2020. At J, he focuses on the winery’s acclaimed sparkling wine portfolio as well as small-lot and single-vineyard Pinot Noir.

KJ also holds an MBA degree from OSU’s Spears School of Business, through the Watson Graduate School of Management. He is also an Adjunct Professor at Santa Rosa Junior College, teaching Advanced Sensory Evaluation and Wine Regions of California.

Away from the winery, KJ is active in his community. A member of the Sonoma County Farm Bureau and Sonoma-Marin Young Farmers & Ranchers, he is also returning to his roots as a Beef Leader for Gateway 4-H in Windsor, California. A collegiate polo player, he can be found atop his pony for summertime matches. KJ also enjoys traveling, discovering new restaurants or relaxing at home with his two bulldogs, Sir Winston Churchill and Lady Eleanor Roosevelt.